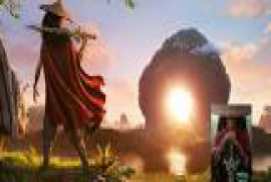 In an area called Kumandra, a re-imagined world where an ancient civilization resides, a hero named Raya decided to find the last dragon.
Directors:
Don Hall, Carlos Lpez Estrada | Long ago, in the imaginary world of Kumandra, humans and dragons lived together in unity. However, when the evil beasts called Druun threatened the land, the giants offered to save humanity. Now, 500 years later, the same animals are back, and it’s up to a hero to chase the last dragon and stop Druun forever.